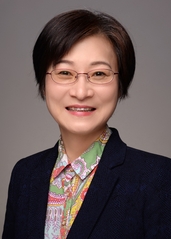 From September 1996 to July 2000, Can Zhang received the master's degree in Medicinal Chemistry from China Pharmaceutical University. Then she obtained her PhD. in Polymer Chemistry and Physics, School of Chemistry and Chemical Engineering, Nanjing University, from January 2001 to December 2003. Can Zhang has been working at China Pharmaceutical University since July 1986, and was a visiting professor at the University of Maryland and a senior visiting scholar at the Toyama Medical University, Japan. She has received special government allowances from the State Council and she is also selected as a new-century innovative talent of the Ministry of Education, a leader of science and technology in the 333 High-level Talents Cultivation Project of Jiangsu Province and also selected as the second-level training object of the Project. She received the honor Outstanding Young Backbone Teacher in the Jiangsu Blue Project. She won the first prize of Natural Science Award, Ministry of Education, the third prize of Science and Technology Progress Award, Jiangsu Province and nomination of Jiangsu Young Scientist Award. Professor Can Zhang was named ESI China Highly Cited Scholar for six consecutive years (2013-2018).